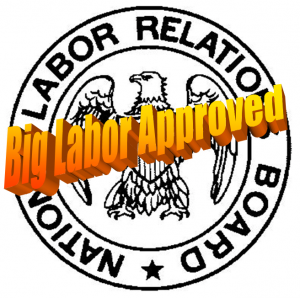 In their aggressive overreach to help the union bosses, the National Labor Relations Board has a devastating strong of courtroom losses that are putting them back into place.  The House Education and Workforce Committee looks at their grasp for more power:

During the final days of 2011, the Obama labor board jammed through the regulatory process sweeping changes to long-standing rules governing union elections, changes that undermine employer free speech and worker free choice. As Education and the Workforce Committee Chairman John Kline noted:

The Obama board’s rush to enact this rule before it loses its quorum confirms what my Republican colleagues and I have suspected all along – this board is not fighting for the best interests of our workforce, but instead is determined to advance an activist, pro-union agenda at any cost.

Yet in their haste to adopt a flawed rule, board members Mark Pearce and Craig Becker neglected to follow the law. Citing Hollywood icon Woody Allen, Judge Boasberg writes:

Eighty percent of life is just showing up. When it comes to satisfying a quorum requirement, though, showing up is even more important than that. Indeed, it is the only thing that matters – even when the quorum is constituted electronically. In this case, because no quorum ever existed for the pivotal vote in question, the Court must hold that the challenged rule is invalid.

The decision represents a victory on behalf of workers and employers, and is hopefully not the last. As the Wall Street Journal noted, “Given the NLRB spectacle of the last three years, this probably won’t be the only time the commission loses in court—or the only time that judges need to invoke Mr. Allen to describe its absurdity.”

Indeed, this is just one of many examples of federal courts reining in the activist NLRB. Other instances include:

Meanwhile, actions taken by the Obama NLRB that have escaped judicial scrutiny are wreaking havoc on America’s workplaces. The last example is found in New York where workers at one department store are experiencing the consequences of the board’s endorsement of job-destroying micro-unions.

Under its 2011 Specialty Healthcare decision, the board empowered union bosses to gerrymander the workplace to their own advantage. Now, an NLRB regional director has blessed a union at Bergdorf Goodman that only includes sale associates selling women’s shoes on the store’s second and fifth floors, dividing the workplace and undermining the freedom of workers.

The Labor Board seems to have run amok as far as I’m concerned. Micro unions in any place of business cause discord and are a way to upset an organization that otherwise is not upset.

The federal judiciary has proved to be an essential check on the NLRB, especially in light of Washington Democrats’ refusal to support common sense reforms that will protect the nation’s workforce. For the sake of workers and job creators, let’s hope the federal judicial system continues to hold the NLRB accountable for its activist agenda.

If Biden sincerely wants the many U.S. schools that remain shuttered to reopen soon, he should publicly acknowledge the simple fact that thousands of school districts, predominantly located in jurisdictions where union bosses wield relatively little coercive power over teachers, are safely offering in-person instruction now.

“The Biden-Harris ticket’s ugly message to employees across America is: ‘Pay Big Labor to undercut your “economic interests,” or be fired from your job’!”