From the National Right To Legal Defense Foundation who represented the employees at Lamons Gasket and who secured the “Dana Rights” for employees against Card Check Forced Unionism until the Obama NLRB took them away with this decision:

Under the Foundation-won Dana decision, workers may collect signatures to request a secret ballot election during a 45-day window period following notice that their employer has recognized a union based on a card check organizing drive. The ruling is intended to counteract coercive practices frequently associated with card check, which allow organizers to bully or mislead employees into signing cards that count as “votes” toward unionization.

The NLRB overturned Dana just as President Obama-appointed NLRB Chairwoman Wilma Liebman’s term expired. Meanwhile, Obama-appointed Board Member Craig Becker, who co-authored a union brief in the original Dana case, refused to recuse himself from the case. Becker, a recess nominee, faces bi-partisan opposition to his confirmation in the U.S. Senate. One Board Member, Bryan Hayes, vigorously dissented and called the ruling a blatant roll back of employee freedom.

Any decertification votes that have been cast but not counted by the NLRB will now be discounted, thereby invalidating the voice of thousands of workers nationwide.

The National Right to Work Legal Defense Foundation is a charitable organization that provides free legal assistance to employees nationwide. The Foundation is providing free legal aid in both the original Dana case and in the newly-decided Lamons Gasket case in which the Board overturned the Dana protections. Mark Mix, President of the National Right to Work Foundation made the following statement regarding the ruling:

“The Obama Labor Board’s ruling to kill the Dana Corp. precedent that allows workers a secret ballot vote to kick out a union that gained control of the workplace in an abusive ‘card check’ campaign adds to an already exhaustive list of paybacks from the Obama Administration to Big Labor.

“Big Labor and its allies have launched a full-scale assault on worker freedom and the Obama Administration is working tirelessly to appease them through bureaucratic means after they failed in Congress. The American people and their elected representatives in Congress oppose the Card Check Forced Unionism bill, but the Obama Labor Board seems determined to impose card check on American workers in every way it can.

“Taken with the NLRB’s other recent actions, the Obama Administration has made it easier for union operatives to steamroll over workers while making it next to impossible for independent-minded workers to stand up for their rights or decertify the union hierarchy.

“While the secret ballot provides at least a limited protection to ensure that union recognition enjoys the uncoerced support of a majority of employees, no worker should ever be compelled to join or pay dues to a union, or accept the union’s so-called representation, to get or keep a job.” 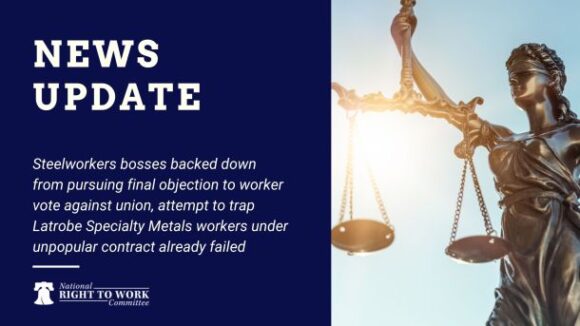