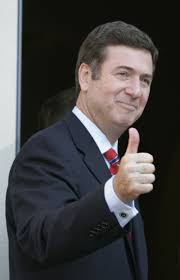 In Virginia, voters get a choice between Obama’s Former-Democrat National Committee Chairman and chief Obamanomics cheerleader Tim Kaine or  freedom champion Former-Governor George Allen.  George Allen has championed freedom for for employees from forced-dues as Governor and U.S. Senator.  His campaign has announced that he intends to continue to fight compulsion for both workers and businesses  if he is elected to the U.S. Senate in 2012.

From Wesley Hester at the Richmond Times-Dispatch:

Republican U.S. Senate candidate George Allen will today roll out his “Freedom to Work Act,” a three-pronged blueprint to free U.S. businesses of what he sees as onerous burdens imposed by the federal government.

Allen will unveil his plan at Botetourt County-based Dynax America Corp., a Japanese subsidiary that manufactures parts for automotive transmissions. Allen recruited the business to the state as governor in 1996.

The goals of the plan, Allen said Tuesday in an interview with The Times-Dispatch, are to “help businesses create jobs, save the taxpayers money and protect the liberty of working men and working women.”

[T]he plan would amend the National Labor Relations Act to prevent workers from being compelled to pay union dues or fees to obtain or keep a job and guarantee workers the opportunity to cast a secret ballot before a union can be organized.

“No working man nor working woman should have to pay union dues or fees of say $700 a year as a condition of getting or keeping a job,” he said. “That’s just a matter of liberty.”

“Freedom of Movement,” would strip the National Labor Relations Board of the power to order any employer to move, shut down, or transfer employment.

Restrictions on Jonathan Savas and other Orange County Lifeguards will trap them in CSLEA union membership and dues...

What Do Campbell Scientific and Jabil Have in Common?

Campbell Scientific and Jabil are both investing soon in Right to Work Utah, creating a total of 418 new jobs for the state.