Union Bosses Who Stole Millions Free to Enjoy Their Retirements

It has long been clear that the United Auto Workers (UAW/AFL-CIO) is a corrupt union.

It was just a little over two years ago that former UAW President Gary Jones pleaded guilty to embezzling up to $1.5 million in largely union funds, and former President Dennis Williams owned up to conspiring with other union bosses to embezzle hundreds of thousands of dollars.

In 2020, many rank-and-file auto workers were undoubtedly hoping the criminal justice system would send a strong message to crooked union bosses who are inclined to exploit the monopoly privileges they wield under federal law to profit at employees’ expenses.

But anyone harboring such hopes has since been bitterly disappointed.

In fact, on July 20, the Detroit News reported that six crooked former UAW officers, along with their principal co-conspirator, former Fiat Chrysler Vice President Al Iacobelli, had been released from prison without having to serve out what were peculiarly light sentences in the first place.

Among those benefiting from early release were Gary Jones and Dennis Williams. Both served just nine months in prison.

In June, in the words of the News’ Robert Snell, Mr. Jones “traded a medium-security prison cell for a new, $1 million home — raising questions about whether justice was served in a landmark scandal.”

Mr. Williams similarly walked out of a federal prison in March, and returned to his $634,000 home in Corona, Calif.

None of the six releases of scofflaw UAW bigwigs was announced at the time it occurred. As a consequence of these releases, not one of the UAW officials sentenced to prison in connection with the corruption probe remains incarcerated today.

For example, Ray Jensen, a GM powertrain employee in Tonawanda, N.Y., said the early releases felt like “a punch to the gut.” He added: “We worked so hard to get rid of corruption and they basically got off scot-free.” University of Michigan business professor Erik Gordon reacted similarly: “It’s spitting in the faces of UAW members they sold out and whose money they stole.”

National Right to Work Committee President Mark Mix commented that the kid-gloves treatment of thieving UAW bosses, as appalling as it is, would be easier to accept if there were now in place an effective mechanism to prevent current and future UAW officials from ripping off unionized employees again.

In June 2020, Mr. Mix had, in his capacity as president of the National Right to Work Legal Defense Foundation, sent an open letter to U.S. Attorney Matthew Schneider laying out how the federal government could, in exchange for allowing the UAW to avoid a federal takeover, bring about “fundamental” reform of the union.

The crimes of UAW chieftains, wrote Mr. Mix, were greatly facilitated by “their dual coercive powers of monopoly exclusive representation and authorization to cut deals mandating that rank-and-file workers pay union dues, or else be fired (in states without Right to Work protections).”

“Unfortunately,” said Mr. Mix, “Mr. Schneider did not seize the opportunity to relieve workers from being forced to accept the representation of the corrupt UAW at the bargaining table or forced to fork over dues or fees to the UAW as a job condition.

“Mr. Schneider ignored union reformers, and simply focused on minor cosmetic changes in the way the UAW operates, highlighting how its officers are selected.

“Today, even Neil Barofsky, the attorney selected by the Biden Justice Department to oversee the UAW as part of its settlement with the union, effectively admits that the union brass’s culture of corruption remains entrenched.” 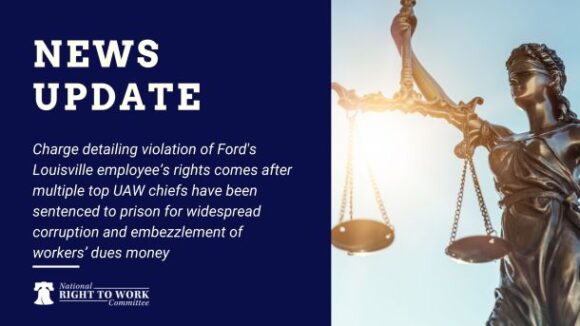